[update] public photography is >>NOT<< #BANNED in kuwait

UPDATE: Saturday 27 November 2010
RETRACTION
On Saturday, November 20, 2010 the Kuwait Times published an article titled 'Multi ministry camera ban frustrates artists' in which incorrect information was provided. The newspaper regrets failing to verify the information. The article wrongly stated that a ban on DSLR cameras was implemented by the Ministries of Information, Social Affairs and Finance. This information is false. In a follow up investigation, it was proved that no such ban has been issued. We regret this error and deeply apologize for any inconvenience caused.  >> Link <<
source: Dash M >> Link <<
main source: Kuwait times 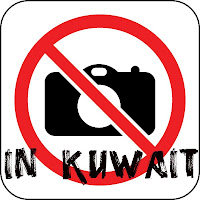 "KUWAIT: After the ban three ministries placed on photography, most Kuwaiti youth are a bit confused about what to do with their cameras if they can't use them in public and why such laws were implemented in the first place. The Ministry of Information, Ministry of Social Affairs and Ministry of Finance recently came to the conclusion that photography should be used for journalism purposes only. This has resulted in the ban of Digital Single Lens Reflex Cameras (DSLRs) in public, on the streets and in malls.

What most Kuwaiti photographers have come to wonder is how such a decision could be reached by authorities, especially considering that digital cameras and cell phone cameras have the same abilities. What most people think of photography as a hobby has become a bit misguided due to the fact that the country has so little exposure to art. While using a DSLR, passersby may wonder if the camera is being used for the wrong reasons.

Mohammed Al-Eisa, who picked up photography as a hobby more than 10 years ago, said that he has decided to take photos of animals or still life due to the fact that these subjects don't mind having their picture taken and don't make a scene. "I started facing problems the very first day I bought my camera," Mohammed added.

What often happens is that a big black camera tends to worry people. Taking a picture of a stranger would seem like much less of an issue if you were using a more discreet camera or even a cell phone. Mariam Al-Fodiry said that she has faced similar problems with her hobby and that being a girl doesn't help at all. She said that in some cases it makes the problem even worse. "Switching to abstract and landscape photography was one the options I considered after getting into enough trouble," Mariam said.

Majed Al-Saqer said that sometimes people stop him while he is in his car with his camera, as if he were planning to kill someone with it. He said that he isn't sure what the real problem is, whether it is people taking photos of each other or the size of the camera."

If you are open to having a guest blog poster please reply and let me know. I will provide you with unique content for your blog, thanks.

@Anonymous send me an email of what kind of content where talking about :D